Africa is home to the largest number of water-scarce countries in the world. Of an estimated 800 million people who live in sub-Saharan Africa, 300 million live in a water stressed environment. By 2030 this scarcity will likely displace anywhere between 24 million and 700 million people as conditions become increasingly unlivable.

Africa’s climate is characterized by extremes, from a humid equatorial climate at the equator, through tropical and semi-arid in the middle of the region, to an arid climate towards the northern and southern fringes. Sub-Saharan Africa has a relatively plentiful supply of rainwater, but it is highly seasonal, unevenly distributed across the region and there are frequent floods and droughts. Drought is the dominant climate risk in sub-Saharan Africa.

Africa is particularly vulnerable to the effects of climate change and global warming. The Human Development Report predicts as much as 10% less rainfall in interior regions of Africa, which will be amplified by water loss from rising temperatures. The water issues caused by climate change impact the continent much more violently compared to developed nations that have the resources and economic diversity to deal with such global changes.

The most immediately apparent impact of water scarcity in Africa is on the continent’s health. Waterborne diseases such as typhoid fever, cholera, dysentery and diarrhea, are common because people are forced to drink from unreliable sources of clean water. Water scarcity causes many people to store water in their houses, which increases the risk of household water contamination and incidents of malaria and dengue fever spread by mosquitoes.

Women and children are especially burdened with sourcing for and collecting water for their households. Carrying the typical jerrycan, which can weigh over 40 pounds when full, over long distances every day has health consequences such as permanent skeletal damage, as well as decresed mental and educational abilities due to the effects of stress on decision-making and memory skills.

The lack of clean water leaves many communities in deep poverty. The so-called “water poverty trap” was developed by economists specifically observing sub-Saharan Africa and refers to a cycle of financial poverty, low agricultural production, and increasing environmental degradation. Within this poverty trap, people are subjected to low incomes, high fixed costs of water supply facilities, and lack of credit for water investments, which results in a low level of investment in water and land resources, lack of investment in profit-generating activities, resource degradation, and chronic poverty. 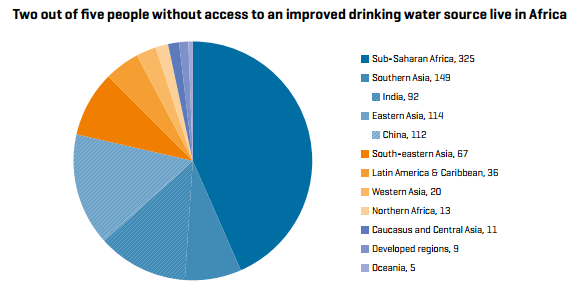 Because the majority of Africa remains dependent on an agricultural lifestyle, and 80% to 90% of all families in rural Africa rely upon producing their own food, water scarcity translates to a loss of food security. The impact of droughts and desertification is greater in terms of economic loss and human life loss due to crop failure and starvation. Additionally, lack of water causes many Africans to use wastewater for crop growth, causing a large number of people to consume foods that can contain chemicals or disease-causing organisms transferred by the wastewater.

Water accessibility has led to more aggression in Africa. The Nile, Niger (which extends from Guinea to Nigeria), Zambezi, and Volta basins are vital sources of food, water and transportation for many communities, with a potential to spark regional conflicts and unrest.

The prevalence of rural villages in Africa makes it one of the most difficult regions to reach in terms of water aid. The extreme wealth gaps between the rich and the poor hinders the rural people from gaining access to clean water technologies and efforts, with the poor often paying four to ten times more for sanitary water than the elite. It is estimated that fifty percent of all water projects fail, less than five percent of projects are visited, and less than one percent have any long-term monitoring.

To adequately address the issue of water scarcity in Africa, the United Nations Economic Commission for Africa emphasizes the need to invest in the development of Africa’s potential water resources to reduce unnecessary suffering, ensure food security, and protect economic gains by effectively managing droughts, floods, and desertification. Some suggested and ongoing efforts to achieve this include an emphasis on infrastructural implementations and improvements of wells, rainwater catchment systems, clean-water storage tanks, as well as reduction in contamination by gabage and disposable bags.

Nigeria, 31 Others At Extreme Risk to Civil Unrest and Violence Due to Climate Change