Increases in greenhouse gases have led to unprecedented regional warmth in the Arctic. A 2013 article published in Geophysical Research Letters has shown that temperatures in the region haven’t been as high as they currently are since at least 44,000 years ago and perhaps as long as 120,000 years ago. The period of 1995-2005 was the warmest decade in the Arctic since at least the 17th century, with temperatures 2 °C (3.6 °F) above the 1951-1990 average. Some regions within the Arctic have warmed even more rapidly, with Alaska and western Canada’s temperature rising by 3 to 4 °C (5.40 to 7.20 °F). 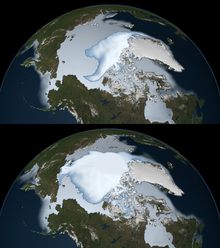 The poles of the planet are more sensitive to any change in the planet’s climate than the rest of the planet, warming faster than lower latitudes. This is mainly due to a phenomenon called Ice-Albedo Feedback, whereby melting ice uncovers darker land or ocean beneath, which then absorbs more sunlight, causing more heating.

Sea level rises can considerably influence human populations in coastal and island regions and natural environments like marine ecosystems. Sea level rise could displace many shore-based populations. In Nigeria it is estimated that a sea level rise of just 200 mm could create 740,000 homeless people. Other impacts may include increased coastal erosion, higher storm-surge flooding, inhibition of primary production processes, more extensive coastal inundation, changes in surface water quality and groundwater characteristics, increased loss of property and coastal habitats, increased flood risk and potential loss of life, loss of non-monetary cultural resources and values, impacts on agriculture and aquaculture through decline in soil and water quality, and loss of tourism, recreation, and transportation functions.

There is an immediate need for more public interest and awareness on the effects of climate change, more outreach on adaptation options, uniform access to information on current climate change risks and guidance on what information and tools are available.

How Much Plastic is in the World's Oceans?