Greenhouse Pollution and the Dangers of Ocean Acidification

The excess carbon dioxide in the atmosphere caused by the burning of fossil fuels is absorbed by the ocean, where it changes the acid balance of seawater. The oceans are paying a price for this service. The repercussions for marine life may be enormous.

When carbon dioxide dissolves into the ocean, it creates carbonic acid. The ocean has dissolved so much carbon dioxide in the last 150 years that the acidity of the oceans’ surface has substantially increased.

Before the Industrial Revolution,(mid 1800’s) pH of the ocean surface waters ranged from 8.0 to 8.3 (pH decreases as acidity increases) Ocean pH has dropped a full 0.1 units since then, to the 7.9 to 8.2 range. Unless significant cuts in carbon dioxide emissions are realized in the next few decades, the pH will fall another 0.14 – 0.35 units by the year 2100 as the oceans continue to acidify. 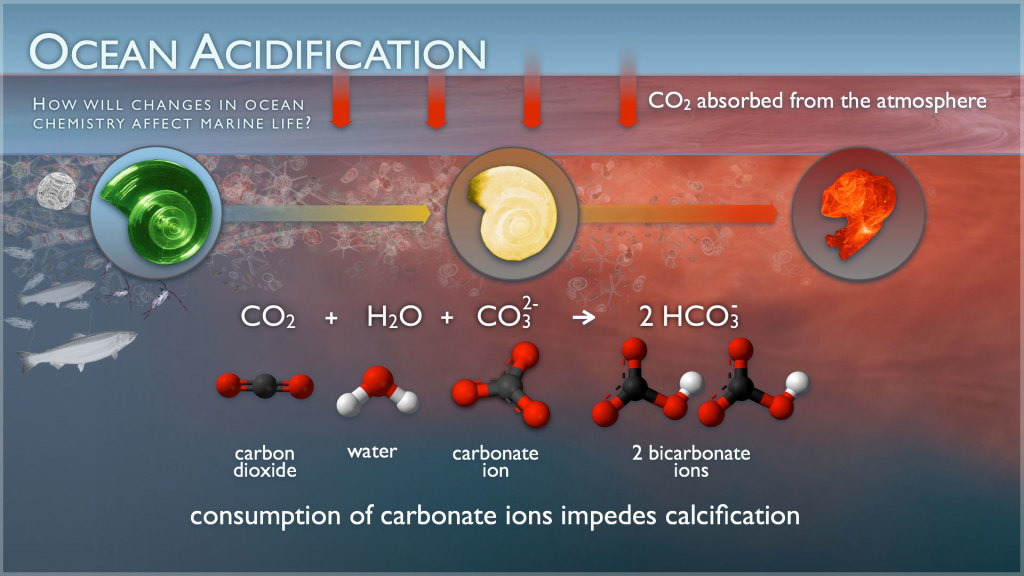 Higher acidity in the ocean creates problems for a number of organisms. Corals and other creatures that build shells out of calcium carbonate are particularly vulnerable, since they cannot form their shell if the acidity passes a critical level, their shells will dissolve.

The effect of ocean acidification is more pronounced at colder temperatures. And it is believed that these important micro-organisms will die out or be forced to move to warmer waters in order to survive in the coming decades.

What this will mean to the birds, fish, marine mammals, and humans that depend on the oceans for their livelihood is yet to be studied. Major extinction of many species are quite possible, which will have serious impact for communities where marine related activities provide more jobs than any other sector of the economy.

The effects on the Atlantic are expected to be delayed several decades compared to the Southern Hemisphere oceans, but are still expected to be significant by the end of the century. Corals in tropical and subtropical waters will not dissolve in the more acidic waters, but the increased acidity will cause them to grow more slowly.

When this added stress is added to the already significant impacts of coral reef bleaching (Coral reefs around the world have been severely damaged by unusually warm ocean temperature) from global warming, pollution, and destruction due to dynamiting of reeds to harvest fish, the outlook for coral reefs in this century is exceedingly bleak.

About one third of the world’s coral reef have already been damaged or destroyed in the past century, with another one-third at serious risk of destruction by 2030.

What the future holds 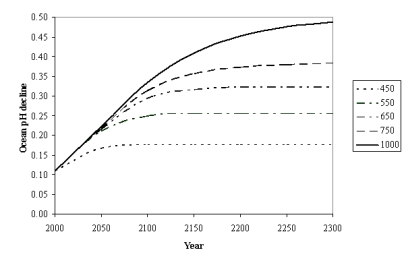 Ocean life can adapt to higher acidity. One study (Spivack et al, 1993) found that pH levels in the ocean 7.5 million years ago was about 7.4, far below today’s pH level. The big concern with the current increase in acidity and drop of ocean pH level is that it is being compressed into such a short period of time. Past changes in oceanic acidity have presumably occurred over tens of thousands of years giving time for life to adapt.

Modern sea life will probably adapt poorly to more acidic waters. This is because the ocean has not been as acidic as they are now for at least 650,000 years and probably millions of years beyond that. Modern ocean life has evolved over a great deal of time under balanced ocean conditions, and the current change may occur so fast that a partial collapse of the food chain in some regions may occur. A 2005 report by the Royal Society of the UK projects the decrease by 2100 will be 0.5pH units, and notes that it will take more than 10,000 years for the ocean to return to its pre 1800s acidity level.As it is with many aspects of human-caused climate change, the dangers are enormous, but poorly understood by many. Dramatic alterations in the marine environment appear to be inevitable; ocean acidification is a powerful reason, in addition to that of climate change, for reducing global carbon dioxide emissions.

Action needs to be taken now to avoid the risk of irreversible damage to the oceans. We recommend that all approaches be considered to prevent carbon dioxide reaching the atmosphere. No option that can make a significant contribution should be dismissed.

Bring Your Own Bag Campaign