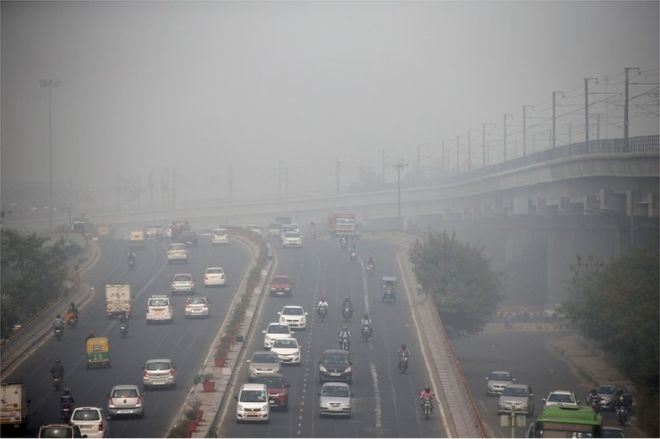 Delhi in India is one of the most polluted cities in the world. The widespread use of festival fireworks, the burning of rubbish by the city’s poor, plus farm waste from around the city, vehicular emissions and construction dust, all contribute to the city’s thick fogs.

A team of researchers from the US, India and Singapore will be attempting some time next year to clean up the air around a coal-fired plant in Delhi.

The idea is to mount a retired jet engine on a flatbed trailer. With the exhaust nozzle pointed at the sky, the engine will be placed near the smokestack and turned on.

As the engine roars to life, it will generate a nozzle speed of 400 metres per second (1,440km/h; 900mph) – about the speed of sound. The exhaust will create powerful updrafts that will blast the emissions from the plant to higher altitudes, above a meteorological phenomenon called temperature inversion, where a layer of cold air is held in place by a warmer “lid” trapping smog.

The jet exhaust will act as a “virtual chimney”, drawing in and transporting the smog. A single jet engine can deal with emissions from a 1,000 megawatt power plant.

But will this experiment work? Critics doubt whether the jet exhausts will be powerful enough to create a virtual chimney and blow out the smog, and question whether expensive jet engines can be used on a large scale to control air pollution in a vast city such as Delhi. Farmers in the area are already raising concerns of noise, and may disrupt the tests.

However the scientists remain optimistic. “Each new technology should start with the least resistant path for success,” says lead researcher Dr Moshe Alamaro of MIT “The concentration of emission from coal is very high near the power plant. So a jet engine that elevates this emission is more effective near the power plant than somewhere else in the city that is plagued by smog.”

“This could lead to a successful implementation of a new technology for smog mitigation all over the world,” He adds.